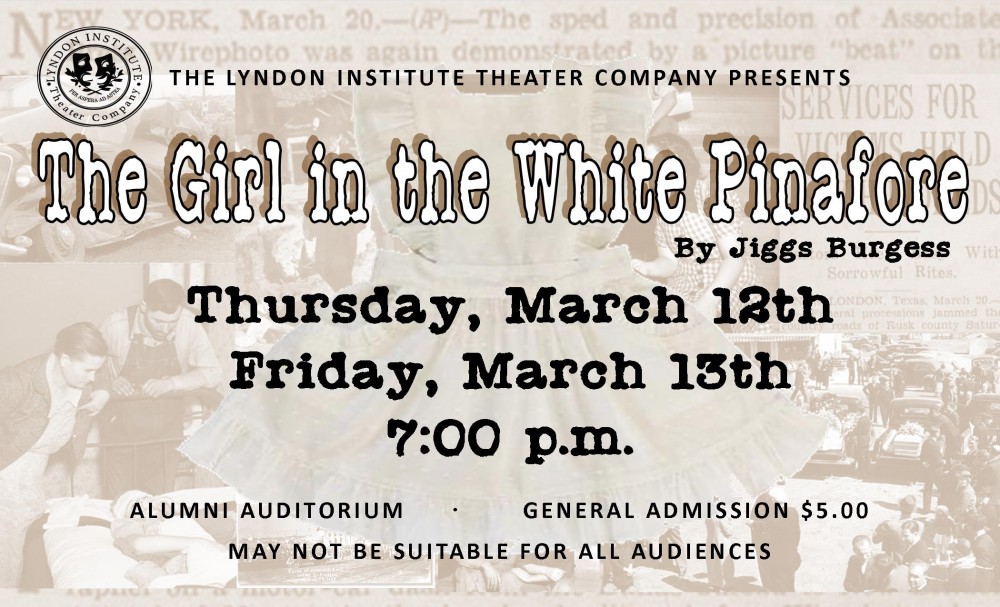 The multi-award-winning Lyndon Institute Theater Company will present Jiggs Burgess’ one-act drama The Girl in the White Pinafore as their entry into the Vermont Drama Festival, featuring special public performances at 7:00 p.m. on Thursday, March 12th and Friday, March 13th in the Alumni Auditorium at Lyndon Institute. Students in the cast and crew will also travel to Springfield High School in Springfield, VT on Saturday, March 21st for competition in the Vermont Regional Drama Festival. Admission to the Thursday & Friday public performances is $5.00 per person.

On the last day of his life, William Chesley Shaw is haunted, figuratively and literally, by his past. He had been the superintendent of the New London, Texas school district on March 18, 1937, when, due to a gas leak from an improperly installed pipe, the New London school exploded. The ghosts of the school’s children, led by Amelia (the girl in the white pinafore), now haunt Shaw. Hurt and confused, Amelia cannot move on until she can forgive herself for her mistakes on that fateful day and forgive Shaw for his role in the tragedy. Based on real events that touch our lives still, The Girl In The White Pinafore asks tough questions about guilt and grief and is more a story about the search for redemption than an outright ghost story.

While this production is intended for a general audience, it does feature sensitive subject matter. Audience discretion is advised. The performance is approximately 60 minutes in length. The public may also attend the regional performance on March 21st at Springfield High School. For more information, please contact Lyndon Institute Theater Company Director Laura Wayne at [email protected].

Announcement of School Closure Re COVID-19

In response to the COVID-19 pandemic, Governor Phil Scott announced a Continuity of Education Plan for the orderly dismissal of all schools, and cancellation of all school-related activities, no later than Wednesday, March 18.  In an update to this directive on March 26, Governor Scott ordered Vermont schools to be closed through the rest of the 2019-20 school year. The Lyndon Institute campus has been closed to students since, Monday, March 16 and all students are working online. Stay safe and healthy.