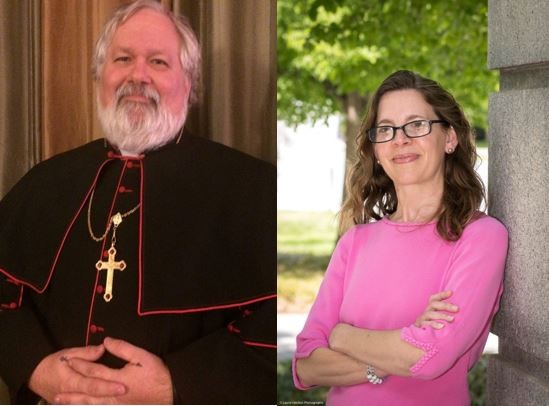 Lyndon Institute is proud to announce the Commencement Speaker and Faith Leader for the graduating class of 2020.  Although recording audio for a graduation parade is not what anyone expected, we are pleased to give the seniors a sense of normalcy for their celebration. As the parade begins, Bishop Jason Sanderson, DD, will open with an invocation, after which Colonel Donna (Boera) O’Harren will give her commencement speech.

Abp. Jason Sanderson, DD, was born in Burke, VT and is a graduate of Lyndon Institute class of 1984. Following graduation, he entered the religious life, eventually being ordained to the priesthood in 1993. Following a brief hiatus, he returned to the priesthood, serving as a missionary in several African countries. He was consecrated bishop of the Liberal Catholic Church International in 2006, elected Presiding Bishop in 2013, and currently serves as bishop for the LCCI's Diocese of New England.

Donna (Boera) O’Harren is a graduate of Lyndon Institute class of 1988.  While at LI, she was on the cross-country running, track & field, and ski teams, and also served as a basketball team manager.  She was active in forensics and the student council as well.  A native of Lyndonville, Donna is the daughter of A. Richard and Julie Boera (now residing in South Burlington) and the youngest of their seven children, all of whom graduated from LI.  She is a 1992 Graduate of the University of Vermont and a 1999 Graduate of Columbia University School of International and Public Affairs.  Upon graduation from UVM, Donna was commissioned as an officer in the U.S. Air Force as a “Distinguished Graduate” of the Reserve Officer Training Corps (ROTC).  She served as an intelligence officer throughout her nearly 24-year career in the Air Force and was assigned to locations as far away as South Korea and Saudi Arabia, and as nearby as New York City.  Her other assignment locations included Hawaii, California, Florida, South Carolina, Rhode Island, Virginia, and Washington, DC.  Among those assignments, Donna was privileged to serve three tours as a unit commander at various organizational levels.  She also attended the Naval Postgraduate School in Monterey, California, and the Naval War College in Newport, Rhode Island.  She is the recipient of numerous military decorations, including the Legion of Merit, the Meritorious Service Medal, the Defense Meritorious Service Medal, the Air Force Commendation Medal, the Air Force Achievement Medal, the National Defense Service Medal, the Southwest Asia Service Medal, the Global War on Terrorism Service Medal, and the Korean Defense Service Medal.  Donna retired from the Air Force in 2016 with the rank of Colonel.  In “retirement,” she has been busier than ever working at her church, volunteering in her community, serving as “CEO” of Home Ops, and raising two active teenage/tweenage student-athletes in Northern Virginia, along with her husband, Shannon O’Harren, who is also an Air Force Officer.  Of all the places they’ve traveled around the country and across the world, Vermont remains the closest at heart!

The parade will begin at NVU-Lyndon at 11:00 a.m. on Sunday, June 7th, 2020.  The event will be live-streamed by NSN and broadcast on 97.7.   We are asking that spectators adhere to state guidelines to view the parade responsibly and not congregate in large crowds.  Because of this, our track and football field will not be accessible during this event.