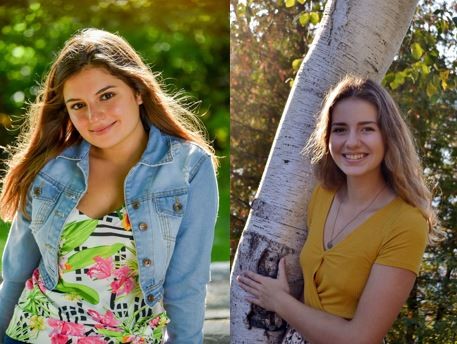 Lyndon Institute Announces the Class of 2020 Valedictorian and Salutatorian

The valedictorian of the graduating class at Lyndon Institute is awarded to the student who receives the highest weighted grade point average during their tenure at the school.  The student to realize that accomplishment for the Class of 2020 is Maria Manuela “Manu” Di Pace Martins.  In her role as valedictorian, Manu will present the valedictory address during the school’s commencement ceremonies in June.

A residential student from Brazil, Manu’s four years at Lyndon Institute have been marked by rigorous academic pursuit and deep community engagement.  As an AP Scholar with Honors and NHS member, Manu blended a demanding academic load with remarkable character and community service.  Her energy in such endeavors as the Global Competency Committee through the Rowland Foundation and her time with both the Model UN and Scholars Bowl illustrates her desire to always be engaged and learning.

But perhaps one of the most significant traits of Manu is her willingness to reach toward and develop her passions.  A student equally skilled and at home in an AP Calculus or an AP Literature class, Manu is a dynamic student who embraces ideas and challenges.  What might serve as an even more original example of this desire to challenge herself is Manu’s two years with the LI Nordic team.  Joining “the herd” her junior year, Manu got the full Vermont winter experience.  Selected as a co-captain her senior year,  Manu, usually quite humble, has been known to state that she is the “best Brazilian nordic skier in the NEK.”

Accepted to Trinity College at the University of Toronto, Reed College, and Brandeis University, Manu will attend McGill in the fall where she “might study either law or political science or the arts.”

The salutatorian for the graduating class is awarded to the student who receives the second-highest weighted grade point average during their tenure at the school.  The student to realize this accomplishment for the Class of 2020 is Halie Bean. With this honor comes the opportunity for Halie to address her peers at this year’s commencement ceremonies.

During her time at Lyndon Institute, Halie has shown a wide range of academic interests and much artistic success. Halie’s sharp analytical skills and insightful comprehension is demonstrated by her success in AP math and science courses as well as music and literature courses.  But perhaps the area in which her peers will most remember Halie is her passion for music and her many performances on our stage.  From Select Chorus performances to the Talent Show, Halie has delivered many moving performances for our community.  Moreover, selected for four years at the VT All-State Music Festival, Halie has displayed a deep desire to develop and share her craft as both a singer and a musician.

But it is not all numbers, meaning, and melody with Halie.  As a four year member of the LI Ultimate Team, Halie proved herself to be among the top ultimate athletes in the state, being selected as a junior to Vermont Equinox, a state select team that competes at a national level.

As a junior, Halie traveled to New Orleans and fell in love with the life and culture.  She applied to four different colleges in New Orleans and, despite being accepted to colleges from Boston to Hawaii, Halie plans to attend Loyola University in New Orleans where she will study music therapy.

Halie is the daughter of Kelly Bean and Lisa Charron.

Announcement of Remote Learning Re COVID-19

In response to the COVID-19 pandemic, Lyndon Institute has transitioned all students, faculty, and staff off-campus to a remote learning/ work model since, Monday, March 16. Our school will remain open in this fashion through the end of the 2019-20 school year. We can be reached by email and all phone messages are being sent via email to the recipient should you need to get in touch with us. Stay safe and healthy!